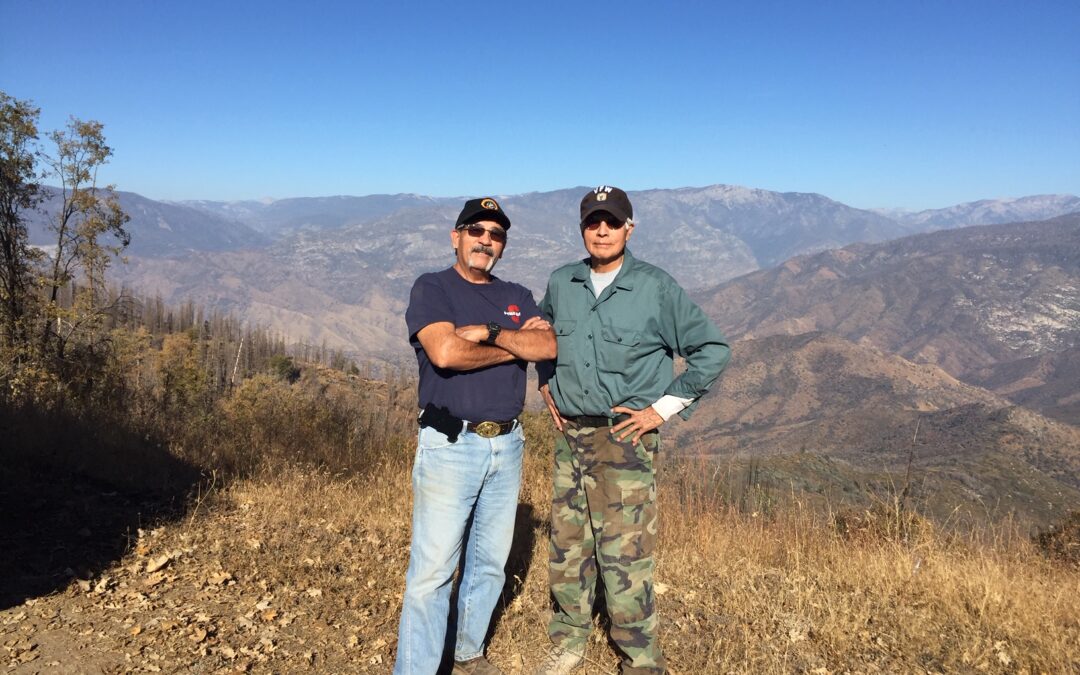 In this October 2019 photo, Dirk Charley, left, stands with his brother Benjamin Charley Jr. both Native veterans at Delilah Ridge, in Fresno County, California. In the background is the land of the Dunlap Band of Mono Indians. (Courtesy of Dirk Charley)

Some join the military for employment and learning a trade, others for education, including getting a college degree. But a common denominator among Native men and women who have served or are serving in the military is a warrior ethic. Part of the warrior ethic is to protect ancestral lands, the people, and care for community members who can no longer care for themselves.

For service members returning to their communities, there are often ceremonies to cleanse and welcome them home. Many Native American veterans are asked by their tribe to serve as leaders. You will almost always see an honor guard ceremony at any official Native American event. That’s how Native communities honor past and living warriors.

During the 2020 Census, many veterans have volunteered their time to make sure their tribal members are counted accurately. They know the importance of enumerating their people. Now that the Census deadline was cut short by 30 days ending on September 30, there is a sense of even greater urgency to complete the count.

One such veteran and warrior is Dirk Charley, Dunlap Band of Mono Indians. Charley is a Navy veteran and has worked for the U.S. Forest Service in firefighting, human resources, labor and employee relations, public affairs, and tribal liaison for disaster recovery and emergency preparedness.

A natural storyteller and teacher, Charley brings his vast life experiences to the table and can translate what he has learned to every member of his broader community. He frequently engages community members, chiding them with humor to fill out the Census form.

Growing up near his ancestral homelands, Charley emphasizes the importance of family and service as one of eight siblings “We devote our lives to honor [our mother].” The Charley matriarch turned 92 this past year and is mother to six veterans.

“I’m a cultural geographer at heart. This is something my dad taught me at a young age. As veteran warriors, we protect and defend our most vulnerable citizens, our way of life, and our ancestral lands. We need to make sure that we’re counted accurately. We have to plan for things our people will need. It’s inherent in us as Indian people not to depend on other people to survive,” Charley said.

When veterans meet each other for the first time, they automatically share brotherhood and sisterhood. Veterans have a shared experience in dealing with crisis management and leadership. That creates an instant rapport, and when they have to get work done, brother and sisterhood become apparent.

They’ve all had to sleep in barracks, eat poor food, and endure boredom with sudden battle anxiety. But they know how to work together as a team for the greater good. And from this, they develop a greater bond that helps them work together when something has to get done.

Charley was asked by his tribe to be a 2020 Census liaison. His sense of mission as a warrior kicked in, and he has devoted a lot of time and hours on the road speaking with community members about why the Census is important.

He said the Census as a necessary planning tool for Native communities and representation in the Congress.

“It also allows those in Sacramento and Washington, D.C., to hear our voice. When we apply for grants and funding, we need an accurate count. That’s one of the first questions asked of every grant opportunity and program. We need to invest in our people, spiritually and culturally, and the Census is the first step,” Charley said.

Charley explained that a more in-depth discussion could follow with federal, state, and local governments beyond Native people as a statistic or data point by being accurately counted.

“Native people can share their knowledge of the land and its rich cultural resources. We can then move into an area where we can be tactful and diplomatic and, above all, allow federal and state governments to understand tribal sovereignty,” Charley said.

By getting an accurate count during the 2020 Census, tribal leaders and Native people provide a broader picture of where they live. From this, tribes and Native people can work better with the government to ensure their interests are addressed, and natural and cultural resources are protected and preserved.

“The Census asks our tribe to get the best of the best information about our people. It’s up to us as tribal leaders to encourage our members to do it and indicate their tribal affiliation whether they’re filling out the Census online or on the paper form,” Charley said.

The COVID-19 pandemic affected Charley and his tribe, just like every other community throughout California.

Census liaisons were geared up before the COVID-19 pandemic to canvas their communities, hold events to educate the importance of being counted. When the pandemic hit, these plans went out the door, and tribes had to figure out other innovative ways to reach its members.

“We are visual people. We are connected. Without giving each other a hug or a handshake, we miss that a lot, but we have to be there for them. 2020 has brought many challenges to us. We have to be leaders to figure this out,” Charley said.

“I ask other leaders in our tribal communities who are comfortable with technology and know-how to connect with our people to help,” Charley added.

By utilizing virtual conference platforms and other social media outlets, including using the telephone, Charley and other tribal liaisons across the state can safely communicate the critical messages of being counted.

Charley volunteers a great deal of his time checking up on community members in the Central Valley of California. People often ask him about programs and services and how to apply for them. He is always ready to provide that information and other advice that they may not be aware of.

“Even though our tribal members are located around the state for historical and economic reasons, we’re still connected with our land. Even though we’re separated, we still care for each other and still honor and care for our homeland,” Charley said.

Charley described growing up with his father. “My dad and I traveled together to tribal conferences and gatherings. My dad invested in my siblings and me. We are following his footsteps as leaders. In every tribal community, there are veterans. We know how to coordinate and get things done. We’re survivors. We are warriors and world travelers. It’s often up to us to get out into the community and provide advice and knowledge about programs and how government works. I know tribal chairs and governors are busy, but they have to take the time to make sure their people are counted.”

Access to quality health care resonates with tribal communities. It is important to show people the connection between an accurate count of tribal citizens in the Census and fully funding their healthcare needs.

“We make sure that our people get the best health, dental, and vision care as well as masks and hand sanitizers, as protection against COVID-19,” Charley said.

“As a veteran, firefighter, tribal liaison and advisor, these experiences have made me a better husband, a better dad, and a more thoughtful son to take care of my mom and help others. I know other community leaders, activists, and veterans feel the same. We all know life goes on. We can’t give up. That’s not the Indian way. Our ancestors invested in us with knowledge. We have to dedicate our time on earth to uphold and maintain all those sacrifices they made for us and the wisdom they entrusted to us,” Charley said.

These interviews and articles are written on behalf of the Native People Count California campaign. For press inquiries or questions, please contact us via email at info@nativepeoplecountca.org.